is now carrying on his father’s family business as well as legacy. 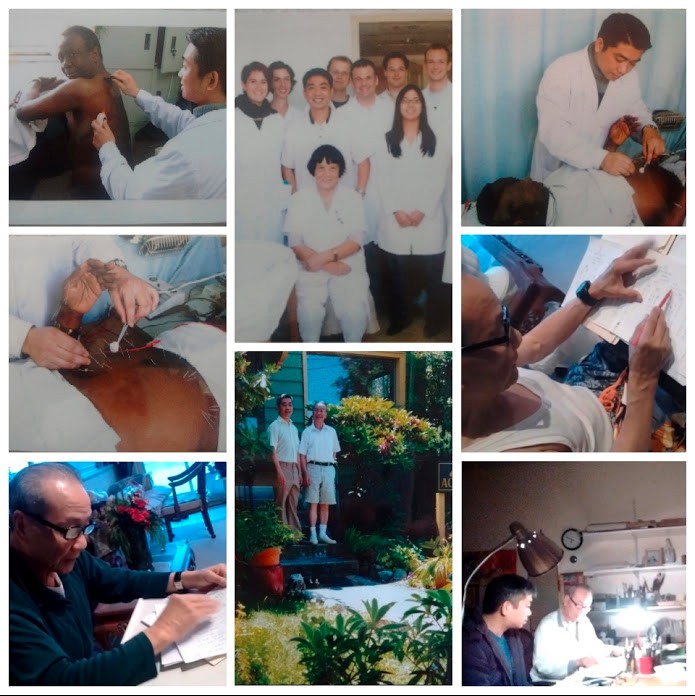 Dr. Zheng has passed down all of his acupuncture skills to John who is now ready to make Seattle a better and healthier city.

John Zheng (Dipl. Ac.) had 10 years of experience giving acupuncture treatments to people in China including at one of the top four hospitals in the capital of China named “China-Japan Friendship hospital” (CJFH) and a few other smaller hospitals in Southern China.

While he was in China, he had too many great experiences in using traditional Chinese acupuncture techniques as well as his father’s own completely new acupuncture system.

Three and half years of schooling in Hawaii and more clinical experiences there.

Back home in Seattle, he spent 7 painstaking years studying Biomedicine. So now he has both Chinese and Western medicine knowledge. Below John’s father stories can give you more insights into John’s family background as well as this over 29 years of Seattle family business.

Dr. Rusheng Zheng has practiced Chinese medicine since the 1960’s.

His interest in healing began early.  His grandfather, a widely respected herbalist, was instrumental in training his grandson in the application of herbs. As a young lad, Rusheng would collect herbs along the hillsides, mountains and fields. Such early exposure proved invaluable to Dr. Rusheng for his later formal studies of Chinese Herbal Medicine and its application for treating illnesses.

Dr. Rusheng’s acupuncture expertise is due to specialized training from the Honorable Xinnong Cheng, president of the Chinese Acupuncture and Moxibustion Society of China. He received additional training in Dacheng Tuina, (Chinese massage), from professor Dr. Zang-Fuke, physician/chief of staff at Beijing University. Dr. Zang-Fuke was awarded the first professorship of Tuina in China.

Dr. Rusheng was born in Fengsun, Southern China. He moved to the United States in 1991 and soon after opened his Greenlake Chinese Medicine Clinic in Seattle, WA.

What our patients are saying:

The man now not using his wheelchair actually told me many dramatic improvements in his body after receiving my acupuncture treatments.  Those improvements include: he had lost 10 pounds (basically Feces accumulated over such a long period of time; definitely not cancer because his family doctor had checked his body) back to normal weight like the healthier body he used to have;  his swollen face was also back to normal; his visions were better; his aching inside his ear was gone; he could spit out the phlegm, something he couldn’t for such a long time; he was able to turn his neck from side to side which he couldn’t before; his Parkinson disease hand tremors also disappeared; he could bend his knees and stand up without any help, and many more improvements as one can imagine.

Foot pain of the man who diagnosed with a neuroma by his western medical doctor is now completely gone. – jz

My name is Rusheng Zheng. My father wanted me to learn Chinese Traditional Medicine when I was little. He told me a story about Dr. Chen Yueren, who was famous in China about 2500 years ago. He once used acupuncture to rescue a prince whom people considered to be dead and who was going to be buried alive. Another time, Dr. Chen was invited, by King Chi to his palace. At their first meeting, Dr Chen told the king that he had an illness. It surprised the king who said, “No, I am healthy.” The king said to his officer after that, “I believe the doctor just wanted to make money and get fame from wealthy people.”

A few days later, Dr. Chen met with the king for the second time. He said to the king “My king, your illness is getting worse and deeper from the surface.” King Chi laughed over this with his officer and did not answer Dr. Chen. Some days later, Dr. Chen met with the king again and the doctor ran away immediately. King Chi was confused and asked someone to catch up with Dr. Chen and ask why. Dr. Chen said: “When the illness is on the surface in the beginning, it is easy to treat by washing with herbs. When the illness gets deeper into the meridians and organs, it can be healed by acupuncture and taking herbs. When the illness goes into the bones, there is no way to treat it even by an angel. Now, I see the king’s illness has already gone to the bones, and I can no longer help him.” After a few days the king died.

I came across this story again when I studied Chinese Traditional Medicine years later, and then I understood how Dr. Chen could do those great things. The answer is that Dr. Chen knew a secret: people have their own PRIVATE PERFECT HOSPITAL, right in their bodies.

The meridian system in our body is what I am referring to as the private perfect hospital. It’s an energetic model and exists in another dimension.

The meridian system pertains to the internal organs and extends over the body exteriorly, forming a network and linking the tissues and organs into a complete unit. We call the energy flow of the meridian system Jin Qi. Jin Qi circulation ensures the functioning of organs and maintains the balance of Yin and Yang, a healthy body. (show picture of yin and yang). So the meridian system with its Jin Qi is just like a hospital working toward a healthy body. Furthermore, Jin Qi on the face expresses the situation of one’s health by changing color. That’s why Dr. Chen could know the king would die. He saw a little bit of yellow color around the king’s ear in the beginning, which became bluish in color on the second visit and spread to the corner of his mouth on the third visit. Dr. Chen got an accurate diagnosis from the king’s private hospital.

Jin Qi gathers together in some spaces, or stations. Stations of Jin Qi are called the points of acupuncture or acupoints. The Jin Qi in an acupoint is called Point Qi. Stimulating the Point Qi by a needle can regulate the circulation of Jin Qi and keep the body in balance of yin and yang (a healthy body). So, Point Qi is just like a “body’s doctor” who works in a body hospital. Remember the prince that Dr. Chen rescued from being buried alive? Dr Chen could tell the prince was still alive from the shine on the top of his nose. Dr. Chen knew the prince still had some “ body doctors” alive who could rescue the prince. He used nine acupoints to revive the prince successfully, according to an ancient book.

When we find that the sick patient’s “body doctors”have been sleeping, we use acupuncture to wake them up. As acupuncturists, first we make sure that we get the Point Qi (body doctor) by finger feeling. It may not be necessary to use many acupoints. We use different finger methods, as different information is made available to inform the body doctors. There are more than 30 kinds of finger methods.(Show a chart of ac.methods)

However, your “body doctors” will do a great job beyond your own comprehension for your health and treatment after the acupuncturist informs them.

Since I have practiced acupuncture for many years, I know that it works on many illnesses, including internal diseases (e.g., cold, hypertension, sciatica), other diseases (e.g., pain symptoms, sinus problems, eczema, cyst and fat reduction), gynecological disorders (e.g., menopausal symptoms) as well as emergency and chronic illnesses. Let me talk about some examples. 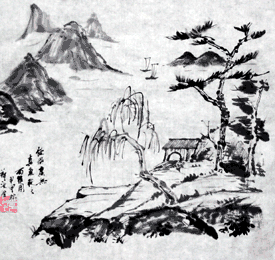 According to an ancient Chinese proverb: “It’s too late to dig a well when you are thirsty.” So, Chinese Traditional Medicine stresses the prevention of diseases. There are quite a few acupoints (ex. Zusanli, Guanyuan,Dazhui) that are good to strengthen the immune system. In the 1980’s, I worked in Shenzhen City, China, where there was an outbreak of influenza. 818 people went to the hospital to receive acupuncture to prevent the influenza. The point we used was zusanli. None of the individuals who received acupuncture got the illness. Last year people were talking about SARS. According to what I read in the Chinese newspaper, many people were getting help with acupuncture against SARS.

When I was in China, once I had to go to a woman’s house because she had diarrhea as much as 30x per day and was vomiting after using antibiotics for 3 days. She had lost her energy and could not speak when I met her. I used acupuncture on her limbs and stomach. Within one hour, the patient said she felt much better. She had thought she was going to die.

Several years ago I went to my friend’s daughter’s wedding on an island. One lady in the wedding party caught a bladder infection, and she was miserable and frustrated that she could not get away from the restroom. I told my friend’s daughter that I had brought acupuncture needles, and it was OK to let her to come out of the restroom. After I did ear acupuncture on her, she started to smile. She later gave a good and happy speech to the bride that night since her bladder infection was much better.

Another area that is treated by acupuncture is depression with low energy, which one may get from stress and anxiety. We find stuck Qi and imbalance are results from depression. I always use yang meridians on the back and yin meridians on the front of the body together to disperse the stuck Qi and restore the balance of ying and yang. Patients tell me that they feel like a new person after the treatment.

Recently I received a thank you call from a lady that used to have miscarriages, but recently had her first baby. Acupuncture made her become strong enough to carry the baby full term.

Months ago I treated a patient who had had several cysts which were genetic since birth on her head. The largest cyst was bigger than her thumb. After several acupuncture treatments, the cysts disappeared.

Another patient who had had palpitations for three days came to see me. Only one treatment of acupuncture corrected his problem. A few years ago, he suffered for 3 months before he could receive any help from western medicine. He was so happy he told me that he would do anything I wanted him to do.

2000 years ago, the book Huangdi’s Internal Classic said “Human life is dependent upon meridians. All illnesses are related to meridians.” It just unveiled the secret of human life: No Jin Qi- NO LIFE. Using Jin Qi may rescue life.

When I flew in the sky over San Francisco as an immigrant, it was the first time I had left Communist China. I was so excited and yelled in my heart: “My goodness, is this the United States? The sky and land are not different from China!” Fortunately, not only the sky and land are the same, but also bodies are the same. No matter if you are white, black or yellow, all humans have the same meridians in their bodies. So, I can use acupuncture to help people here, as well as in China. Acupuncture is a treasure for human beings.

I really appreciate my patients who are devoted to the use of acupuncture and trust me with their care, including those who have continued to come to see me over the years for their health. You might say, “How wonderful acupuncture is!” I’d like to say how wonderful your private hospital is!

Thank you so very much.